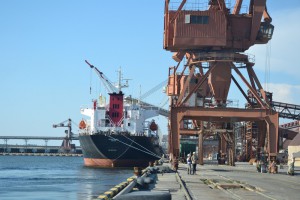 Due to the actions of the prosecutor ‘s office in  Mykolayiv region  the Sea specialized port Nika-Tera has frozen a large investment project of 40 million UAH. At the same time the city budget of  Mykolayiv has lost a considerable amount of lease of the water fund lands. This was stated by the chairman of the company Alexander Gayd, says the press service of the Nika-Tera.

According to the report, the question is  about the arrangement of the inner harbor for the creation of the anchor station. This project aims to strengthen the maritime transport links, because the Eurasian Transportation Corridor and the Transportation Corridor of the Black Sea Economic Community pass through Nikolayev. The goal of the project was to attract new types of cargo and, in time, useful increase of cargo turnover. The realization of the project would make possible to optimize the traffic of ships in Mykolayiv ports and terminals, especially in winter, improving the logistics characteristics of the region.

However, due to constant litigation of the procuracy authorities with the  users of the water reserve land, the Nika-Tera  seaport was forced to freeze the project for an indefinite term.

According to the statement of the deputy of the Mykolayiv regional council, Oleg Mudrak, due to the imperfection of the legislation the budget  of Mykolayiv annually loses more than 4 million UAH land rent from the Nika-Tera. A systematic approach to the issue on the relations between the state and business, and the availability of equal, transparent and regular rules of the game are necessary to resolve the situation, said the head of the Nika-Tera.

LDaily prepared  the short overview of latest news in the sphere of business and finance for last week for the readers. If you missed something, it would  a good opportunity  to correct it. 1. Yaroslav Gregirchak: «Ukraine has to look as a competitive option for investment in the “supermarket” of national jurisdiction» A shoppy talk […]