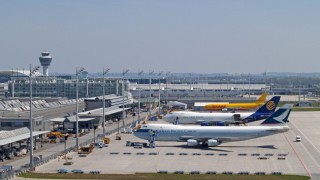 Malaysian companies can become participants in the management of the airports of Ukraine, Najib Razak (Najib Tun Razak) said Malaysian Prime Minister after talks with President of Ukraine Petro Poroshenko at a joint news conference in Malaysia.

“It was about the possibility of bringing in such an efficient operator for the management of our largest airports in Ukraine – under the terms of public partnership or concession -. In the first place, the conversation was about the” Boryspil “, – said Kovalev.
She said that the Ukrainian side has invited representatives of MAHB to Ukraine.

“To discuss whether our legislation is sufficient to implement this idea, or it will be necessary to change the law”, – explained Julia Kovalev.

Malaysia Airports manages five international and 16 domestic airports in Malaysia (and 18 airports for short take-off and landing) and Sabiha Gokcen Airport in Istanbul (since 2008) and Rajiv Gandhi Hyderabad in India (since 2003). Previously, the company was the operator of the airport – Astana, in Kazakhstan (2007-2009) and Indira Gandhi, in New Delhi (2007-2015). The company’s shares are traded on the stock exchange of Malaysia since 1999.

Read more: The EU will allocate 1.6 million for improve the air legislation of Ukraine

Last week, from November 16 to 22, more than 4 million people in the world became infected with the new type of coronavirus, which is a record number since the beginning of the pandemic. This was announced on Tuesday, November 24, the press service of the World Health Organization. According to the WHO, in these […]