Главная › News › Lecturer Rupert Ashmore after 2 years of suit agreed to pay to his former partner £275,000 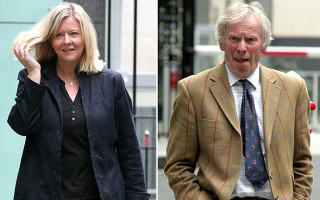 An art lecturer who had a 25-year relationship and a son with a teenage student said he was not sure he loved her any more than his dog and dismissed her as a mere lodger.

Kim Woodward was a talented 19-year-old design student when she fell for artist Rupert Ashmore, a Jaguar-driving 36-year-old lecturer at Salisbury College of Art, in 1985.

But despite moving in together, starting a successful business and having a child, he told a judge she was not entitled to a penny after they split in 2010.

He informed her he never wanted a “long-term commitment” and that marriage “was only good for the tax breaks”, Ms Woodward told a judge.

His name alone appeared on the deeds of the homes they shared and, in their design business, he said she was only an employee he was having an affair with.

When they finally separated, he was adamant she should walk away with nothing – not even a share of the £700,000 north Devon home where they had last lived together.

But after a two-year legal battle, in which a judge branded Mr Ashmore “callous and selfish”, he has now finally agreed to pay his former partner £275,000 to give up her claim to the property.

Judge Mark Ball had rejected outright the retired lecturer’s claim that Ms Woodward had been only a “lodger” in their home and an “assistant” in their business.

Ms Woodward took her former partner to court after he refused her a share of their home at Leworthy Barton, on their breakup.

The property was in his name, as were their earlier homes in Teffont, Wiltshire and Shepton Montague.

In her evidence, she said she had always found Mr Ashmore “controlling and intimidating”. He had reacted badly to her pregnancy in the early 1990s and she said they had separated for a time.

However, they had been a couple in life and equal partners in their business, she insisted.

She canvassed for custom during the day while he was at college, before working together in their studio into the early hours.

At the county court in 2013, Judge Ball awarded her a half share of Leworthy Barton, which comprises an idyllic farmhouse, 50 acres of land, barns and stables.

At the County Court, and again in the Court of Appeal, Mr Ashmore insisted that she had been aware throughout their relationship of his attitude towards ownership of their homes.

She could have been under no illusion but that the properties were his, he claimed. They had always kept their finances separate and never had a joint bank account or credit card.

The business was his alone, with Ms Woodward only his £400-a-month assistant.

He had only stayed with her because they had a son, was not in love with her by the time of the pregnancy, and “could not say if he loved her more than he loved his dog”.

They were a couple and Ms Woodward had clearly lived under the impression that she had a stake in the properties where they lived.

At the Court of Appeal, Mr Ashmore challenged the county court ruling that Leworthy Barton be sold and the proceeds divided equally between them. He said she was entitled to nothing.

After  argument, Mr Ashmore offered Ms Woodward the £275,000 payment to give up her claim to the property. She accepted and the case was settled.

Sir Terence added: “I hope they can both move forward in their lives from this point onwards.”

Wary of exceptional access of representatives of China to the latest European technologies, growing business activity and superiority in the competitive strengths of the Celestial Empire, EU representatives propose to establish total regulation, namely The European Commission believes that it should act as a regulator now and tightly control all transactions of the M & […]