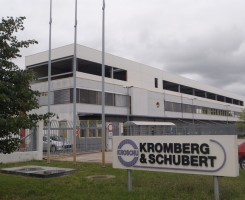 The manufacturer of on-board cable systems is  ready to increase the number of workers from 900 to 5000 people.

A foreign investor, a manufacturer of cable networks for automobiles – Kromberg and Schubert has invested in the production of automotive components plant in Zhitomir € 10 million, and it plans to double its investment and increase the number of workers up to 5000 people in the next three years. This is stated in the press service of the Zhytomyr City Council.

Today there are more than 30 companies of the Kromberg&Schubert in the world. Here are made on-board cable systems for leading European car brands (VW, BMW, Audi, Mercedes). Currently, there are productions in Ukraine in Lutsk and Zhytomyr. In Zhitomir the factory began its work in September 2015. At present, 900 employees are employed.

“Kromberg and Schubert today already invested more than € 10 million and  in the next few years will be spent twice as large, which will enhance the production and increase the number of jobs. For three years the management of the company plans to increase the number of employees up to 5 thousand”, – said in the message.

Earlier, it was reported that the Leoni AG German company will build a second plant in Ukraine. Leoni AG has already created 6,000 jobs in the Lviv region.

Kromberg&Schubert specializes in the design and manufacture of cable systems for the automotive industry.

Japanese mobile operator SoftBank Group Corporation buys the british corporation – ARM Holdings Plc for 24.3 billion pounds ($ 32 billion). According to SoftBank, shareholders ARM Holdings could receive 1700 pence per share, which is 43% more than the value of the securities at the close of trading in London on Friday. Price of ARM shares […]

Uber has already tried to give drivers more autonomy so that they are considered contractors rather than employees. A California court has issued a preliminary order ordering Uber and Lyft to immediately retrain drivers from contractors to company employees. The order will take effect in 10 days. As independent contractors, Uber and Lyft drivers do […]

The company plans to raise $ 2.1 billion of investments in a new round of funding. All the necessary documents have been drawn up and passed in Delaware. The world’s largest taxi service Uber, which head office is based in San Francisco, plans to spend the funds on its expansion, service development in Asia and […]