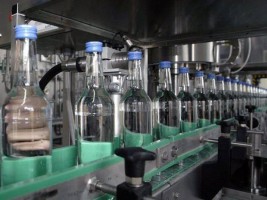 From the sale of enterprises of “Ukrspirt” the state plans to raise between 200 and 400 million dollars. This was announced by Minister of Agricultural Policy Taras Kutovojs in an interview.

“The market itself will determine the amount. According to the forecasts, I think it should be from 200 to 400 million dollars “, – the minister said. The sale process, according to him, will be extended in time. But the first round of the sale of plants that produce food alcohol “should bring from $ 200 to $ 300 million dollars.” Should be noted that the “Ukrspirt” also includes plants that produce industrial alcohol.

According to the minister, only two countries in the world still retain a state monopoly on alcohol production – Ukraine and Belarus.
“For me it is a marker in the context of privatization processes and generally the sign which improves the growth of efficiency of state-owned enterprises.

I would like to transfer the enterprise “Ukrspirt” to the Property State Fund until end of the year. ” – the minister said.
He also noted that today about 2/3 of the alcohol market are in the “shadows.” “Statistics show that retail selling of vodka three times more than produced of alcohol. This suggests that at least 2/3 of this market is in the shade. And the budget losses are not losses of the companies that produce alcohol, losses are in loss on excise duty. If conditional on profits we loose 600-700 million, in the context of excises, which were underpaid – we lose about 3-5 billion dollars, “- said Taras Kutovoy.

Recall the Ministry of Agrarian Policy and Food plans to earn from the privatization of SOE “Ukrspirt” 3-5 billion hryvnia. It was reported that among 81 factories currently works only 25 plants and 34 plant are in the process of the production site.

State Enterprise “Ukrspirt” is the largest producer of high-quality alcohol and alcohol products in Ukraine.
Employees of the company are constantly improving commodity lines and developing new offerings. One of the most priority areas of production now are bioethanol and an alternative motor fuel component

The NBU estimated payments on public debt for the year

China will not sell TikTok to Americans

Beijing believes that the terms of the agreement of selling the US division of TikTok to Oracle and Walmart threaten China’s national security. According to Reuters, referring to the Chinese the Global Times, Beijing will not accept such conditions. At the same time, there has been no official government statement on the issue yet. The […]