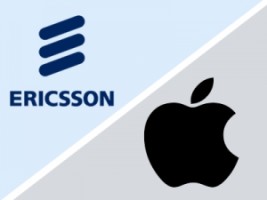 Last winter two well-known manufacturers of technique went to court with counter-accusations of patent infringement. Apple representatives accused their Swedish competitors in the application of technologies in the transmission network, the Swedes responded by suing a counter statement in which it accused Apple of using of their cellular technologies in the production of its equipment.

The company managed to resolve the conflict before the court. According to informed sources, the dispute is now settled in the United States, Britain, Germany and the Netherlands.

In addition, the two companies signed a patent cooperation agreement. Financial details of the agreement were not disclosed. This agreement implies that one party grants to the other one intellectual property rights to several patents.

According to experts, the agreement between the two companies, will help Ericsson significantly increase their revenues. They predict that the Swedish manufacturer of equipment revenue will rise from 9.9 billion kronor ($ 1.15 billion) to 13-14 billion kronor ($ 1.52-1.64 billion).

Ericsson representative Kalsim Alfalahi said the company is very pleased with the agreement with the American corporation Apple, it will help them to reach a new level in sales, open up new opportunities in production and this agreement will serve as a good start for further close cooperation between the two large companies.

This agreement is concluded for a period of seven years. So the companies not only to resolve the conflict before the court, but has also become a promising business – partners.

After signing an agreement with Apple, Ericsson shares immediately jumped 7% on Monday. Analysts estimate the deal positively, noting that it will increase the income of companies and bring new technologies to the world.

French actress and director Maylis de Poncins, author of the sensual short film “Je suis dons tu es” (“I am, therefore you are”), became one of the favorites in the qualifying round of the Only 140 seconds and a lot of meanings – the film won’t leave you indifferent! Maylis de Poncins is a young actress who has proven […]

What can attract Arab companies on the Ukrainian market?

In Ukraine it may soon be a new bank, whose founders will be the Arab leaders of business – community. About this initiative, which sounded Ukrainian-Arab Business Council, informs UNIAN source. This proposal of Council was strongly supported by the authorized persons of the National Bank and the Cabinet. The ofmeeting of business circles of […]

Female solicitors in Scotland earn 42% less than their male colleagues

A recent study by the Law Society of Scotland has shown a 42% pay gap between female solicitors and their male counterparts, despite women representing half of the legal profession in Scotland. The Law Society found that from the age of 36, women are paid a lower salary, on average £18,000 less, than men of […]

The chain of one of the world’s most popular fast food restaurants McDonald’s is suspected in violating tax laws in Europe. Today, the European Commissioner for Competition Margaret Vestager plans to announce a formal investigation into tax treaties with Luxembourg McDonald’s – reports Reuters with reference to informed sources. The investigation is scheduled to consider […]