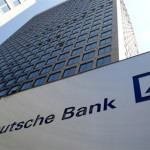 Current and former Deutsche Bank staff have been questioned by the Serious Fraud Office in recent weeks in relation to the investigation into Libor rate-rigging.

Traders have been interviewed about the manipulation of the London interbank offered rate and its euro counterpart, Bloomberg has reported.

The interviews come shortly after the conviction of former UBS trader Tom Hayes, who was jailed this month for 14 years after being found guilty of eight charges of conspiracy to defraud.

Deutsche Bank was fined £1.6bn earlier this year in settlements with US and UK regulators, including a £227m penalty levied by the Financial Conduct Authority.

The bank has already fired seven employees over the scandal. Both the SFO andDeutsche Bank declined to comment on the latest in the Libor investigation.

Bloomberg reported that at least one banker was interviewed under caution, meaning any statements can be used against he or she in court.

The FCA said this year that parts of Deutsche Bank had a “deeply ingrained” culture of “generating profits without proper regard to the integrity of the market”. It said the bank’s failings had been compounded by it “repeatedly misleading” the regulator.

Banks have been fined billions of pounds over the manipulation of Libor, the benchmark interbank lending rate that is used as the basis for hundreds of trillions of dollars of loans and transactions around the world from complex derivatives to mortgages.

Earlier this month, former trader Hayes, from Fleet in Hampshire, was convicted after being accused of being the ringleader in a vast conspiracy to fix Libor between 2006 and 2010.

Shares of AT&T, which have lost 27.6% of value since the beginning of the year, rose up to 5.8% on Thursday after the publication of better-than-expected Wall Street analysts, earnings for the 3rd quarter, which ended on September 30. AT&T reported earnings per share of $ 0.76, which is 19% below last year’s value, but […]