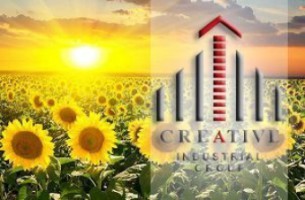 According to the statement of the new management  of the Creative company was opened a criminal proceeding  for illegal withdrawal of the group’s assets. It is reported by the  “Ukrainian News”.

In February 2016 Holosiivskyi District Court of Kiev ordered the freezing of assets of the companies “Protein-Production”, “League” and “Yagotynske HPP”. Seizure of assets was carried out for the request of the Chief of National Police Office in Kiev, due to the fact-finding inquiry in the cases of illegal withdrawal of assets from the “Creative” company, as well as falsification of financial records.

The company believes that the assets, including “Yagotynske HPP” were extracted  illegally as far as Maxim Berezkin did not transfer  to himself the relevant debts of the banks (mainly its an “Ukreximbank”, worth about $ 100 million).

Arrested assets belong to the Berezkin family, who have recently sold their oil extraction business and founded a new company – GREENSTONE. Elevator business was regarded as one of the main activities of the new company GREENSTONE.

Agro-industrial “Creative Group” is an integrated company specializing in the processing of agricultural products, production of feed products for livestock and poultry, food and biofuel production.

GREENSTONE company established in August 2015 based on 25-30% of all assets of the “Creative Group”.

GREENSTONE is the Ukrainian integrated agro-industrial group of companies that unites several business areas, including the production and sale of soybean and sunflower oil and meal, agricultural and animal directions motor company and a few invest-projects. Staff of the company is about 1500 people.

JP Morgan can pay a record fine for the market manipulation

Ukroboroonprom put up for sale 17 companies

The state concern Ukroboronprom transferred 15 state-owned enterprises and corporate rights to two joint-stock companies to the State Property Fund. They have lost their significance for the country’s defense capabilities, according to the concern’s press service. “Ukroboronprom’s enterprises, which were included in the list for alienation, de facto lost contact with the defense-industrial complex for […]

The net profit of the world’s largest production and reserves of Saudi oil company Saudi Aramco in 2020 amounted to $ 49 billion against $ 88.2 billion a year earlier. The decrease was 1.8 times, according to company reports. It is noted that 2020 has become one of the most difficult in the history of […]